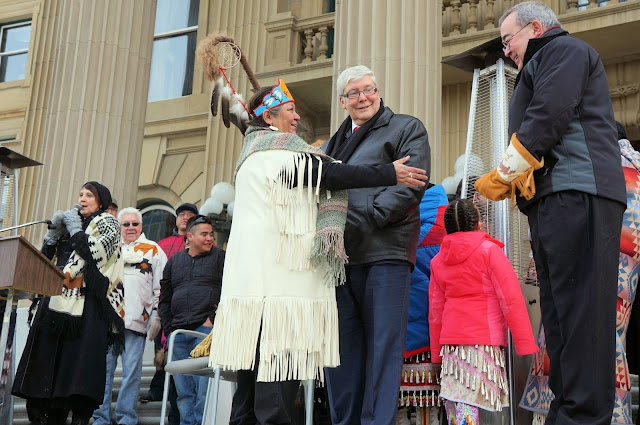 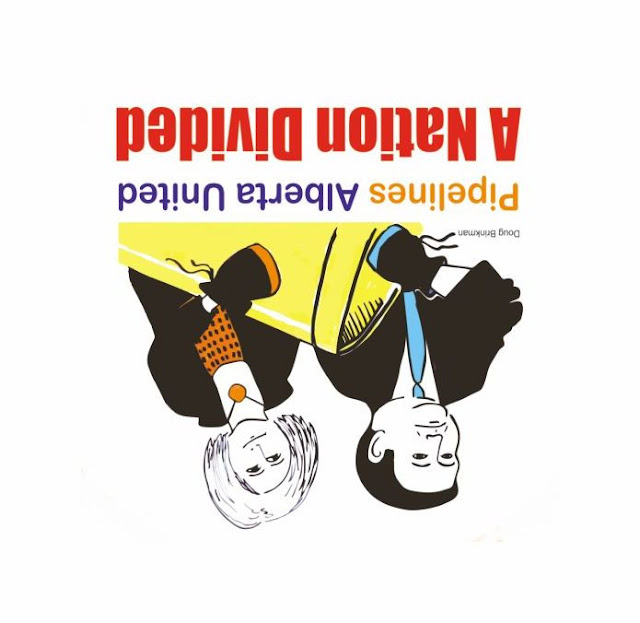 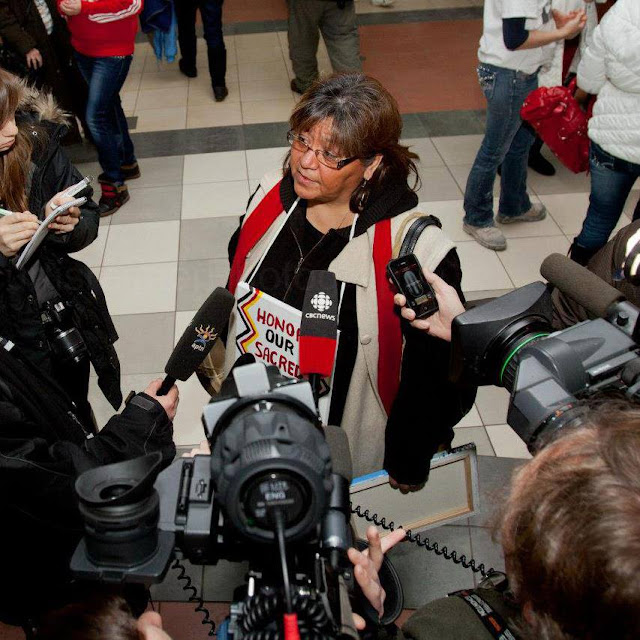 EDMONTON November 26, 2016 CBC: A group of Edmontonians have set up a camp downtown in a gesture of solidarity for the demonstrators at Standing Rock in North Dakota. About 15 people have put up several tents in Churchill Square. They camped overnight Thursday and were gathered around a fire Friday. "We're encouraging everyone to come here with goodwill and to pray for each other," said Anthony Muller, a member of the Bigstone Cree Nation in Wabasca who is in Edmonton for school studies. Those huddled around the fire said it was an important statement considering what people protesting the Dakota Access pipeline have been going through. While demonstrators in North Dakota who have been protesting the pipeline say they have been peaceful, they have been met with police in riot gear. Repeated reports of police using pepper spray and other controversial tactics have emerged in the standoff, which began in April. Taz Bouchier was inspired to organize the Edmonton prayer camp after spending time in North Dakota where she was invited to give spiritual support to the Standing Rock demonstrators. "The most affected I felt was the terror I saw in people's eyes," Bouchier said, describing the actions of the U.S. authorities as "brutal." Opponents to the multi-billion dollar pipeline believe it's a threat to Indigenous land and to the Missouri River which is the main water supply for the nearby Standing Rock Sioux tribe. Garnet Borch, who slept in one of the tents in Churchill Square Thursday, went with Bouchier on her trip to Standing Rock. He didn't witness any violence during his five days at the camp, but said he felt empowered by the strength of the people on the front lines and wanted to be part of the Edmonton prayer camp as a result. "We're standing up for this," he said. "We're not just sitting at home sharing Facebook feeds or whatever, we're out here actually doing something." Chief Tony Alexis of the Alexis Nakota Sioux Nation at Glenevis, 90 kilometres northwest of Edmonton, issued a statement on the North Dakota protests Wednesday. Alexis said he is disturbed to hear "over 300 people have been seriously injured" while peacefully protesting there. The camp in Churchill Square was set up at 8 a.m. Thursday. It will be taken down at 8 a.m. Saturday to make way for other events. A spokesperson for the City of Edmonton said the city is aware of the camp, describing Churchill Square as a free gathering space. The people taking part said police had dropped by several times to ask how things were going, telling them to call if any help was needed. They said other people walking in Churchill Square had been supportive, with many stopping by to offer support or ask questions about the issue. Bouchier, who was also part of a recent flash mob round dance in west Edmonton Mall, said the stance against pipelines is also relevant in Canada, with several proposals on the table. She said Indigenous leaders here have similar concerns about their environmental impact. For now though, Bouchier remains focused on Standing Rock. She said she will head back next month to again stand alongside demonstrators.
at November 30, 2016 No comments:

Jason Kenney really appreciated the story behind my painting so I handed him the painting straight off the easel and said "what better man to have this painting, but a man who understands and appreciates its story" all the while thinking to myself "this guy could very well become our next Premier of Alberta." 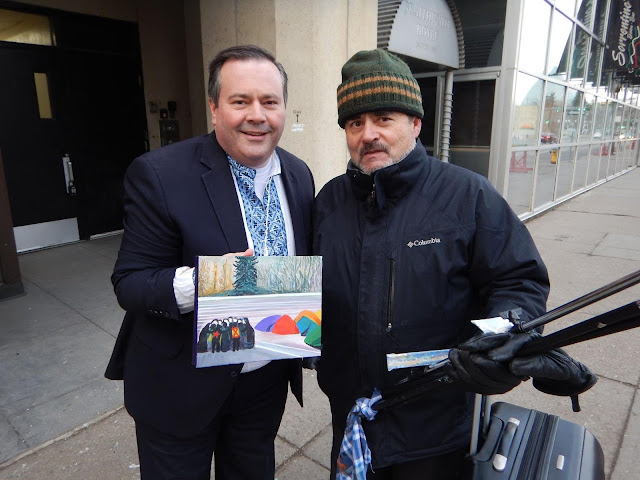 EDMONTON November 2016: When I learned that local political activists were planning a 3 day and night prayer camp/protest in solidarity with the anti pipeline protest at Standing Rock, North Dakota U.S.A, I got out my pencils, sketch pad, canvases, cameras and set up an easel close by the protest from outside the perimeter of the camp to observe and report a news story on canvas and later on YouTube. Activists from the camp told me I was not permitted inside the camp to take pictures during ceremonies but only CBC Edmonton and the protesters were only allowed by the organizers to take photos. I learned later the City of Edmonton did not approve this camp with a permit or a permit for the open fire that was maintained 3 days and nights by the protesters. Limbs from park trees were hacked off and used to fuel the fire on the first day but later trucks were used to haul in cords of wood after police questioned protesters after receiving complaints that someone was spotted from the camp cutting city park trees. I remained outside the camp during the 3 days inside Sir Winston Churchill Square sketching, taking pictures and painting. Sometimes activists would come and watch me paint, take pictures of me at work and at one time the leader of the Communist Party of Alberta brought me over some cookies that she had baked for other activist friends inside the camp. On the final day the camp was taken down I had completed my painting, packed up my stuff and went home. Along the way I crossed paths with Jason Kenney, a former politician of the Harper Government. He and his friends had just come from attending a candlelight vigil for the Holodomor (Ukrainian: Голодомо́р) next to City Hall and Sir Winston Churchill square. Jason said the vigil was disrupted by a couple political activists shouting obscenities at the attendees while carrying placards into the crowd. The Holodomor vigil Jason and his friends had attended was adjacent to the prayer/protest camp in solidarity with #StandingRock so we wondered then if perhaps the same activists from inside the prayer camp were the same activists who upstaged the Ukrainian candlelight vigil. Prayer camp activist and communist party leader later confirmed to me that it was she and another communist friend who disrupted the Holodomor vigil and were glad they did so claiming the Holodomor was a lie. Jason Kenney and his friends were the first to hear the news story behind my freshly painted Water and Oil is Life- Non Violence. Jason really appreciated the story so I handed him the painting straight off the easel saying "what better man to have this painting, but a man who understands and appreciates its story" all the while thinking to myself "this guy could very well become our next Premier of Alberta."

Defending Free Press led me to defend Freedom of Expression 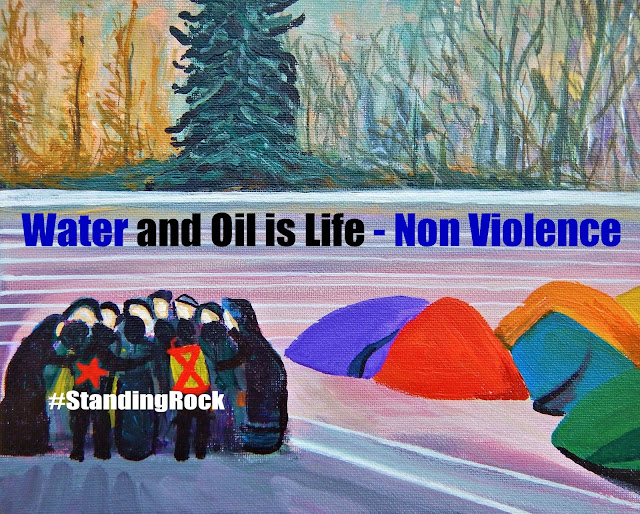 Days later after the camp closed the organizer and leader of the anti pipeline prayer/protest camp Taz Bouchier became angry that I had painted and published a YouTube about the camp and asked other activists not to watch my YouTube about her anti-pipeline protest. 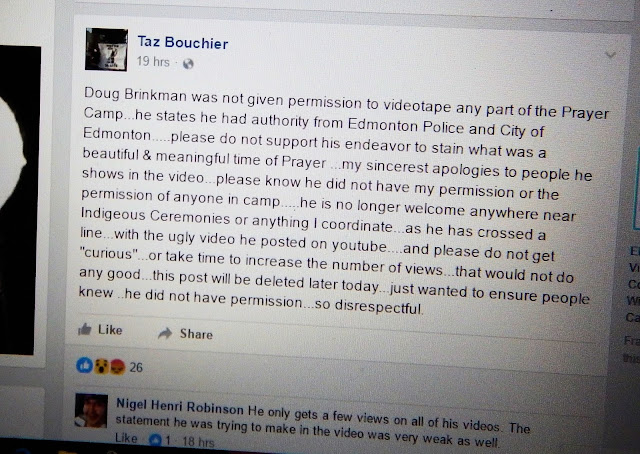 Of course I did not have permission or need permission by the Edmonton Police Service or the City of Edmonton because I already had the right to freely express myself with art in a public square as any Canadian can and I also had the right as everyone does in Canada freedom of the press, media as guaranteed by Canada's Charter of Rights and Freedoms. Taz lied to the City of Edmonton and lied to the Edmonton Police service. 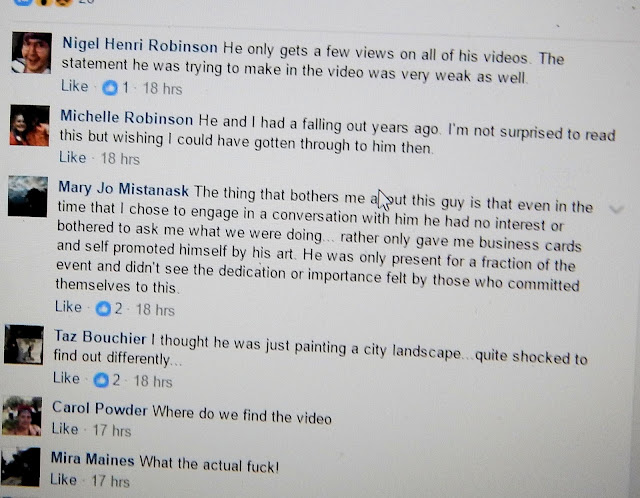 Michelle Robinson, a political activist  and conspiracy theorist who has in past supported Lethbridge University's Professor Anthony Hall conspiracy theory of Israel's involvement with the 9/11 attacks and worked with Hall to have fluoride removed from Calgary city water . Robinson ran for Calgary City Council in 2017 .
2019-03-22 Michelle ran as a candidate for the Liberal Party in Calgary East/ Alberta Provincial Election. I tried to get the Alberta Liberal Party to respond on Michelle's connection to Professor Hall but ignored all my requests.

G.A. Salvador (bottom) Is a long time activist with Edmonton's IWW Wobbles and was the man holding the hatchet in his hands next to a pile of tree branches when the Edmonton Police Service questioned the G.A. about a complaint they had received of someone cutting trees inside Sir Winston Churchill Square. 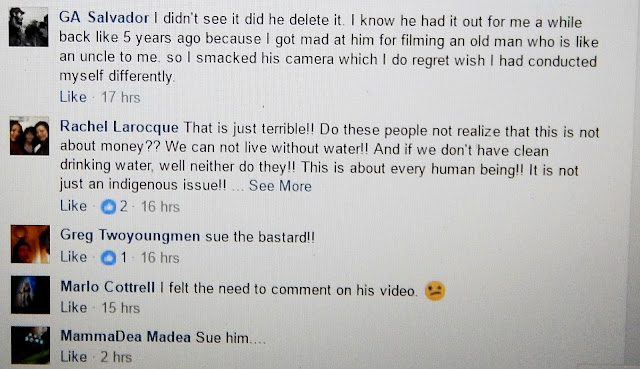 Photo by Doug Brinkman for Citizen Free News
Taz Bouchier's first ban came in 2014 after the closing of the Truth and Reconciliation - Alberta National Event because I refused her editorial control over my news stories on my YouTube. She argued then that my viewers all thought Mayor Don Iveson was getting all the credit for organizing a march from the Shaw Conference center to the Alberta Legislature grounds and that it was she who organized the march after she received a vision in a dream from her creator.


Weeks later a City employee for some mysterious reason came up to me during the early evening of December 31, 2016 New Years Eve while I was showing a painting from my 2016 Fire and Rain art project, depicting the Fort McMurray wildfires outside the City Hall' and threatened me with police action if I did not leave with my painting. The City Manager said "We know who you are, you were not invited, you will have to leave." I was showing my painting next to the ice rink where I had painted my first painting 12 months earlier depicting the wildfires of Alberta. When I refused to leave she threatened me with police action. ​ I complained to the EPS that night of being bullied by this City employee and they suggested I complain to the City of Edmonton. So I did by staging a 36 day picket/protest against the City of Edmonton beginning January 3, 2017 until March 10, 2017 demanding the The City of Edmonton put it in writing why I could not freely express myself with art on public property when it's guaranteed in Canada's Charter of Rights and Freedoms that I can.

YouTube: Art is Freedom Picket
Against The City of Edmonton

On The Picket-Line: Twice a CBC reporter showed up and tried to talk be out of the picket as did an angry Councillor Scott McKeen who yelled at me "GIVE IT UP!" Scott later apologized the next day for his outburst. 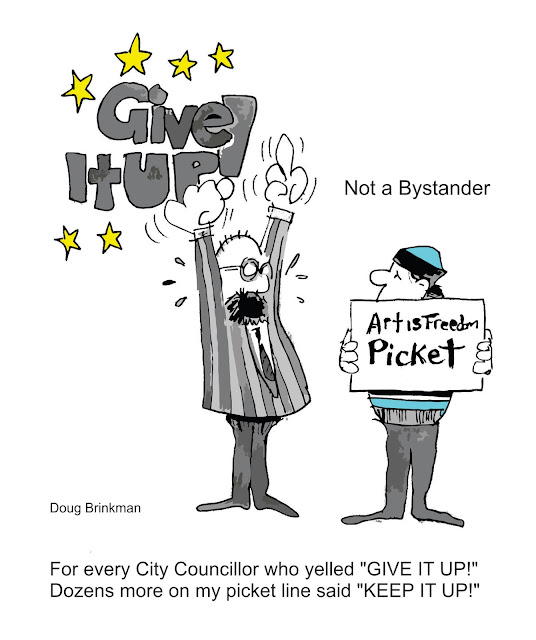 March 10, 2017 The City of Edmonton apologized to me for the threats of police action made on New Years Eve. 2016 and I'm now permitted to paint and show my art in front of City Hall so long as I check in with City Management. 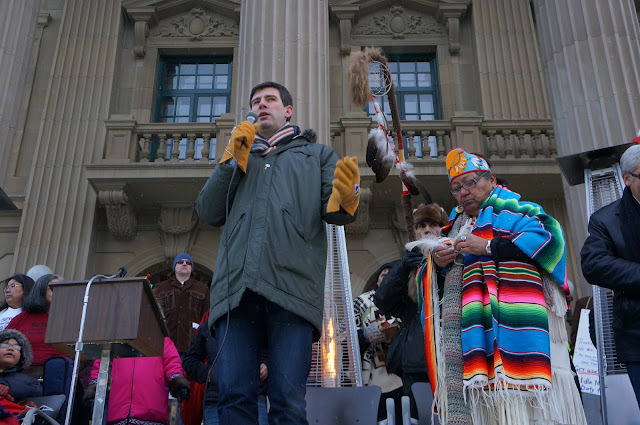 From March 27-30, 2014 the historical Truth and Reconciliation (TRC) Alberta National Event took place in Edmonton. After the closing of the TRC, I had filmed much of the 3 day proceedings inside the Shaw Conference center that included speeches, interviews and outside following a march to the Alberta Legislature for a final rally on the steps. Controversy soon followed my news reporting when elder Taz Bouchier called me up one evening and requested I take down all my TRC videos and re-publish them with her name credited for organizing the march to the Legislature. She complained that Mayor Don Iveson was getting all the credit with his role with the TRC and she had some political interests of her own to consider. I refused her editorial control over my news stories so Taz called for a complete ban watching my YouTubes through social media. Around November, 2016 I again refused her call for editorial control after I reported on a 3 day prayer camp in solidarity with the Dakota's Key-stone pipeline protest that she organized inside Sir Winston Churchill Square. In the fall of 2017 Taz Bouchier ran for political office against Don Iveson for Mayor of Edmonton.